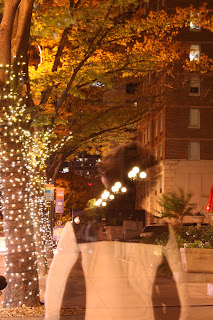 I like my current profile picture on Facebook. It has a cold, lost feel to it. It reminds me of philosophical dilemmas. Which, by the way, since have no answers, turn Atheists into Spiritualists, I believe. Not to say that these two have to be distinct. One can both reject the existence of an ultra-omni being and still strive for inner peace. The difference being, self-reliance and self-control leading the way instead of dependence or fear.

But I digress. Back to the picture.
The cold feel is probably driven by memory. Lit up trees remind me of Christmas and New Years. Lost, of course, is due to the "ghost" affect, but primarily because of my current state of mind. Surrounded by people, work, responsibilities and a new confusion. Walking the "who am I?" path, again! Did this last year, turned out well. Now, however, it bothers me to be back in this state. Partly because I think it came too soon - it has barely been an year, that's Short! Makes me wonder if I messed up the last time, or left the process incomplete. Eh, this statement sounds so effin' full of void. It has no answer! Damn figuring-shit-out phases!
And also, it's partly troublesome because, I realize it's a never ending process. Which in itself is bothersome. Never ending?! That phrase is bothersome. How does one deal with something that will never ever end? Is there a point in dealing with it or is it just a waste of time? Don't answer that. I know it's NOT a waste of time; instead it's a step at a time. But, a step at a time to what? Where am I trying to reach? Fucking Nirvana? Well, that'll take lifetimes!
Anyways. So yeah, this is where I currently stand. Lost. Confused.