Life is a series of transitions.
One after another.
Until, Cessation. Freedom. Liberation.

When I become ready, a lesson strategically presents itself. Accepting it is up to me. Acceptance does not guarantee success. However, success does guarantee the manifestation of another lesson. And yet another lesson after that... and another one and so on... until, all lessons cease, wisdom arises, freedom and liberation prevail.

Currently, transitioning.
Yet again.
Constantly.
Until... Cessation. Freedom. Liberation.
That's right. Liberation is where all this is leading.
Freedom.
Cessation.
It Exits. I Know. I just Know.
Thus, I Believe. Thus, I Do.

I once borrowed a Dr. Phil book from a friend. One of the sentences that stood out for me explained how time heals all wounds. The psychologist-author felt necessary, and rightly so, to point out that it's not just time that heals wounds, it's what happens in that time that does the healing.

A lot, a whole wide lot, is happening in my time. It started some two-and-a-half-years ago, when I started making conscious, often difficult and painful, choices for true long-term happiness. It was slow at first as the process was new and I still had a lot of resistance to it. It started picking up pace as I got more familiar with and skillful in embracing change, listening to my intuition, making those hard choices, and especially as I started reaping the benefits, which for me show up as Freedom. Plain old, Freedom. Freedom from my own notions and ideas and thoughts and conditioning and habits. Hidden way underneath in, what appears to be a deep dark bottom less well, of unconscious behavior and triggers. Slowly, constantly, much rapidly, entering the periphery of my conscious awareness. And thus, slowly, constantly, much rapidly, entering the zone of tough decision making. And thus, slowly, constantly, much rapidly, are being let go of, turning into freedom, ceasing from future existence. 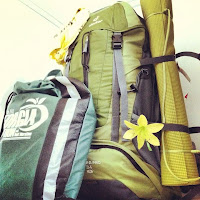 The wheel is turning much faster now. Especially since March-end 2012, when I decided and was accepted to do long-term service at the US Southeast Vipassana Center, aka Dhamma Patapa, in Jesup, Georgia. I filed whatever paperwork I needed to file at school. I shared this road less traveled decision with my family and friends. I finished whatever commitments I had in Atlanta. And by June 15, the three-ish-month transition from that to this ceased; I was here with a travellers backpack, a drawstring bag, six pairs of clothes, two pairs of shoes, a laptop, some stationary, a smart-phone that no longer has service but does have apps!, a yoga mat, and garmin to keep track of how much I run (if and when I run, time and energy permitting).

Before, I could never imagine myself living this life even for fictional kicks. Now, I cannot imagine doing anything else... for all this is teaching me, for all who I am becoming, for all that is still left to unfold.