After dropping papa to the airport Nana-Nani and I left for Greensboro, NC around 4:30 PM on Wednesday - August 10th. We reached Dr. Gupta's house by 9:15 PM. Had some dinner and everybody talked for a long time. Nana-Nani and uncle-aunty went to bed around 12 or 12:30 AM. Ruchika and I, however, were up until around 4 AM. Ruchi is Sat uncle and Madhu aunty's daughter who will be leaving for medical school on 30th or 31st August. We were just chatting about a whole lot of things, no particular area but pretty much everything. She transfered a lot of Hindi MP3s on her flash drive. In the morning I got up before 8AM, got ready, had something to eat, and took a couple of pictures with everyone. 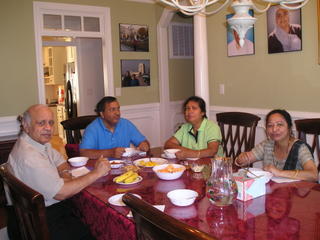 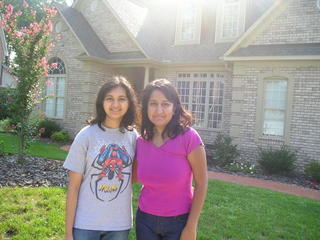 ME and Ruchi(ka)
We left for New Jersey around 9:30 and I drove for close to 6 hours on the highway. We took a break to eat something. Once Nana took over the wheels, I made myself comfortable in the back seat and slept for 3 hours straight. When I discovered that we were still driving on the highway around 5:45, I went back to sleep and woke up after an hour. We reached P. Sharma aunty's place within 15 minutes.

It has been alright spending these couple of days at their Edison home. I ripped a few DVDs and watched a couple of movie videos. Yesterday Nana-Nani, Aunty and I went to the mall but didn't really buy anything. In the evening some guests came over and we all had dinner together. The food, of course, was great! They don't have internet at home, as they are very busy with other stuff, but my laptop is catching somebody's wireless connection and they don't have a password on it... :D good for me!

Today, Nani, Aunty and I went to a different mall and did some shopping. I bought 3 jeans, 2 tops, and an earing set for myself. Nani and Aunty helped me out in picking out these things. Earlier today we went to a temple and bought some Hindi movie videos and sarees (No, not for the temple). Tomorrow, NJ and NY is having India Day Parade, in honor of India's Independence Day. When we were driving through the Indian marker here, I saw Indian and American flags flying on every single pole. Another thing, Aunty has Zee TV and New York Life's advertisement - aah! Gooddd!! - gave me that feeling of, I don't know how to put it in words... seeing that tiranga, that tricolor, that Indian flag, flying high and Indians - and I mean to true representation of India.. the village people of India, running with that tricolor in their hand, being proud of their heritage, the feeling of being an India, running with on sands of my country, being pround of it, rises inside of me every single time I see that advertisement. :) I love you India!
Penned by Geetali on Saturday, August 13, 2005