The multicultural fair was today only. I know I didn't mention it before, but that's because I didn't participate this year. Last year I did India with Himali and Pavan. There were two other boards for India. One done by Amish, Arun, and Nemish, the other done by Anchita, Hasita and Kavita. Pavan made samosas last year and we (the Indians working at the fair) ate them all, leaving nothing for the visitors :) Couldn't help, they were soo good! 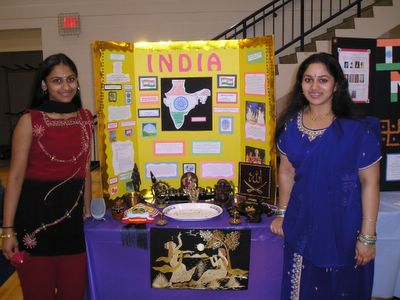 Anyways, this year Mary-Ann and Sonia worked on the India board. The other board on India was put together by Anchita and Hasita. The fair was the same as last years - okay. Almost the same type of boards, absolutely the same dances (with very few variations) and the same attitude - excited and hyper at first, but as time passed watching the same thing and answering the same questions becomes tiring and a huge burden. Therefore, I enjoyed this year's better. After all I was just a visitor, saying hey talking to people and cursing them out for not having any food left (haha! just kiddin'). The best part of the fair was when I saw Miles playing his Viola. Ghosh! I just started cracking up. I don't know what was so funny about it, but it was pretty damn funny!! I didn't disturb him and went on with the fair. I was at the Trinidad and Tobago booth when he came over and said, "Yeah! don't even say a hi." 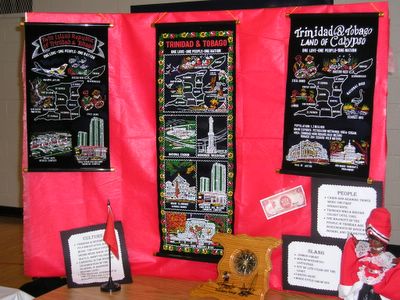 So, I went to his "orchestra corner" and checked out the string intruments he had back there. Started arguing with him how his instrument is a Violin and not a Viola. After all it's played the same way! He explained the difference, "You need to be tall and have gorrilla arms to be able to play Viola." This sentence was aimed towards not letting me play the Viola. Then he actually showed me the two instruments and that's when I finally believed him. He did let me try to play it though. I'm telling ya, you really need to have gorrilla arms to play that thing (yup, exaggerating here)! My arms were not long enough (or so I felt). He was trying to put my fingers at the correct places, but again my pinky (smallest) finger wasn't long enough. I moved that stick thing up and down in an effort to make music, but whatever came out of it was something that you won't ever call music. After making me happy as anything, he played the Viola just for me... awww! Miles is GREAT!! 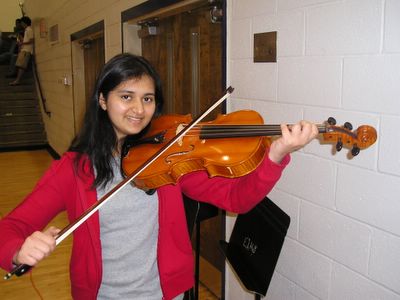 Other than all the fun described above, I had a test in Stats that I did not study for while sleeping at home. Yeah, I got sleepy while trying to read the chapter, slept from from around 8:30pm till 5:54am. Started studying as soon as I got up. Isolated myself from everybody at school to understand this last chapter. I had to go over because I didn't do any of the hw assigned or even read the chapter. Due to the fair not a lot of people came to class. They were either helping at the fair or took an early break (next week is off, it's our spring break). I think I did fine at the test after all. It was not hard at all. Surprizingly, I knew what I was doing.

This six weeks I have all A's and B's, including Physics. It's that amazing? An A in Trig, woohoo! A cursin' B in English, can you believe that? B in Schernekau's?? Hate me, don't you? If you don't then I'm gonna hate you, so you better start hatin' :)

Okay listen, got a haircut today. Had been wanting to get one since forever! Short hair are SO MUCH better to take care of. In India, I had boycutt. After moving to US though, I decided on "becoming" a girl. Change is a part of life I guess. I like long hair too, but :(( you have to care so much! Plus, windy air tangles it up so bad! Anyways, this is how I look now... 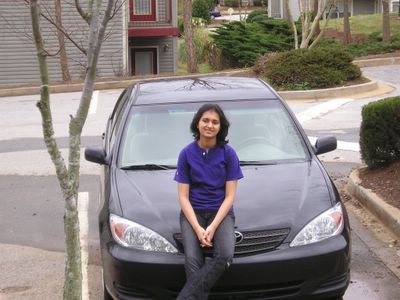 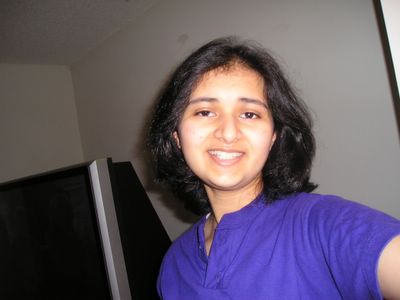 self taken close-up. isn't that the most stupid smile ever!?

Okie dokes (and I like saying "dokes" instead of "dokie") about the Spring Break. Am not doing anything, not going anywhere, don't have any plans, will sit at home all week long and actually study for the AP exams this time. I borrowed Barron's AP Government and AP Physics books from Dees and Lee, respectively. Mom brought Amsco's AP Statistics from her school. All these books are really good. I know I can pass the Gov exam, Stats would take some work, but it's not impossible either. Physics... hahaha... let's not go there, but I'll see where I stand.