What's up with lazy students? Josh always looks over my hw, cw, tests in Gov/Econ class. I didn't really care in the beginning but his attitude got annoying around mid second semester. He didn't bother studying at all!! Today was too much though. These days we are preparing for the Nationwide AP Government exam. Dees has been asking us to do Sample Tests from the book he handed us a few weeks ago. Josh was busy doing his Algebra III homework and as soon as it was close to the time when Dees would go over the answers, Josh started jotting down the alphabets (multiple choice) from my paper. I told him straight up, "It doesn't really matter Josh!" We are doing that crap for practice and Dees is not giving us a grade for it! Hope he starts putting in some effort. 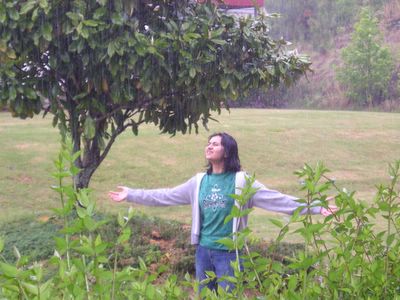 What the hell is wrong with me? I failed the last Trig test pretty badly. The stuff was easy, really, really easy... yet, I just didn't get it. Not only that I don't even feel like actually trying and studying. Have I caught "Senioritus"? Or has "Senioritus" finally got me? I really don't want to be at this point at this time. Got so many exams coming up :( But I just don't feel like studying. Am tired of it! Any suggestions?
Penned by Geetali on Wednesday, April 27, 2005