Of course I couldn't win the battle with my parents and ended up going to NC, but it was not as bad as I expected. I actually enjoyed this time.

We left at 6pm on Friday evening, picked up laddoos and crossed Atlanta by 7pm. Reached their house around 10pm. Mausa ji and Anuj bhai were up, waiting for us. After eating some pulaw, and kadhi chawal, Hansag, Anuj bhai, and I went upstairs, playes cards, listened to music, and chatted for a while. Hansag fell asleep around 1:30, but Anuj bhai and I were talking until 3:30. Then finally we decided to go sleep. Soon, after lying down, I could hear bhai's slight snores. I was sleepy when Anuj bhai was telling me about XML, but when the entire house was sound asleep, and there was nothing to do, I lay there wide awake. 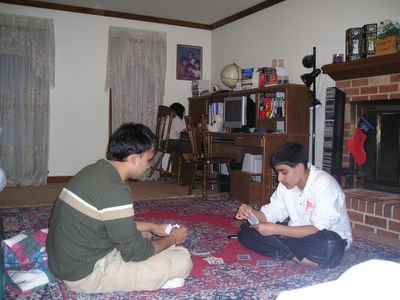 Playing cards in the living room

Got up at 9 in the morning. MausaJi and papa left for the Mandir around 9:30, whereas all five of us - Ritu Masi, Mom, Hansag, Anuj bhai, and I - took showers, ate breakfast, without any hurry, and reached the mandir around 11:30 or 12. Hawan was almost over, but they were singing some bhakti songs. We sat there all that while, and after the aarti and meeting people from here and there had lunch. After everything got done, the packing started.

Back home, after making tea for all the adults, us three kids left for the 4 o'clock show of Robots. It was an okay movie, if you are planning on watching it, I think it would be smart to wait for the DVD. Got back home around 6-6:15, discovered that leaving for Atlanta was on today's to-do list (finally!). Anuj bhai and I had dinner, whereas Hansag just kept on sitting in the living room, watching TV, because he wanted pizza (hehe!). Pet pooja done, so I slipped into some comfy clothes, took a few pics, and sat on the couch watching the two playing cards. Dad came, and we left the place around 7:45.

Slept most of the way back. Got here at midnight.
Penned by Geetali on Sunday, March 13, 2005